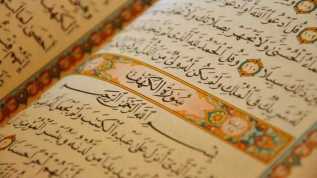 The true test of an intelligent person is a humble awareness of the limits of their knowledge. So said a rather clever man some millenia ago and it remains as true today as it was then. I would add to this though an additional clause: that a truly intelligent person is one who realises that theirs is one among a multiplicity of view and that no interpretation has a monopoly on the truth. Yet if there is one thing that has characterised the public debate around Islam for as long as I can remember (and I have it on good authority that it extends back a great deal longer than that) it has been an atmosphere of polarisation in which both sides of the debate have expressed themselves in tones of blustering over-confidence, generalisation, and over-simplification.

One of the foremost charges levelled at Islamic extremists, from Al-Qaeda and farther back through to the more cancerous growth of Dash, is a poor education in the faith in whose name they claim to be acting. We’ve heard the stories about ISIS recruits shipping off to Aleppo with a copy of ‘Islam for Dummies’ and a Quran with an uncreased spine tucked under their arms. But the same charge has also been raised against critics of Islam, from the recent incendiary exchange on Australian Question Time between the independent senator Jacqui Lambie and Islamic youth leader Yassmin Abdel-Magied, to the acrimonious feud between Sam Harris and Reza Aslan, all the way through to Richard Dawkins, Douglas Murray and anyone working for Fox News. In this war of opinion it can be a trying task for anyone wishing to get an answer to the question ‘But what is Islam? What does it actually teach? And why do I keep hearing about it?’ to find nuanced, balanced, and trustworthy information.

This is why I herald the arrival of a tool and a resource that promises to provide just that. In 2018 the Ananas Foundation are launching ‘The Living Quran’, the first step in an ‘ideology modelling’ project that aims to map on one interactive digital platform all the major texts behind the world’s diverse ideologies, from the Bible and the Torah to the US constitution. But one word in that last sentence is perhaps more important than the others – for what marks the Living Quran out as distinctive and groundbreaking is the diversity it seeks to encompass. Rather than simply providing a digital annotated Quran, which would remain partial and selective in its presentation, the Living Quran seeks to create an ecosystem of context-based information generated by experts as well as real-life communities.

The quality of the content will be ensured not only by a peer-review vetting system but also users will have to hold the Ananas token/crypto-currency if they want to contribute data. What this means is that each contribution is traceable to a particular user as a result of the blockchain technology on which the token rests. This also makes trolling the platform an exponentially expensive form of sabotage.

Why does this project interest me? For the past three years I’ve been a student of Islam – of modern Islamic history more specifically. What drove me to embark on this study was precisely the circumstances I outlined above. In the maelstrom of debate around Islam in popular discourse and the media, I found myself increasingly sceptical of the essentialized positions of both sides of the debate. What I sought was understanding and knowledge, some semblance of truth in other words. And in the cacophony of ideological debate I could find neither. So the only option left was to go and discover the truth for myself.

But this proved harder than expected. I read the Quran, twice, from cover to cover, and both times I had the unsettling feeling that the way I was reading it, largely the same way as I would a novel, was probably not the way this text was meant to be read. I halted several times over particular verses, trying to unpack what they meant, what their significance might be. And repeatedly I wished I had someone whom I could turn to with my questions. But here too I realised that no matter where or to whom I turned I would still only be getting a partial take, one person’s interpretation or understanding. Surely, theirs was not the only way of viewing it. Would the same verse be interpreted in the same way in Indonesia? In Pakistan? In Tunisia? And what about five hundred, seven hundred years ago? Was it interpreted in the same way then? This troublesome conundrum is precisely what the Living Quran aims to address, and is precisely what makes it in my eyes such an exciting endeavour.

The insights provided by mass participation of Muslim communities spread around the globe will go some way to alleviate the question of why so often the Islam that we see practiced by our neighbours and co-workers seem to differ so markedly from the Islam we hear caricatured in the news. The value in compiling such a comprehensive dataset for the education of Muslims and non-Muslims alike, beyond the self-evident, is that it highlights the fact that is so commonly overlooked or under appreciated: that there is not just one Islam but a multitude of understandings, interpretations, views and practices that have sprung from different readings of the same foundational text.

The stated aim of the Living Quran is to combat hate and extremism. The idea underlying the projecty is that true knowledge and understanding of ideology and the documents that underpin it will combat both the ill-judged and uncritical absolutism of converts to extremism, built as it is on imperfect and selective knowledge; but also to combat prejudiced and bigoted hatred, built as it is on the same unsteady foundations as the views of the extremists. In essence, the bluntness and the dogmatic arguments of the extremists and the Islamophobes reinforce each other’s vision of the world. The project thus follows in the spirit of that well-known phrase handed down to us by W.B. Yeats, that it is the sad fact of the world that the wise are full of doubt while the fools are full of passionate conviction.

The project, in its crowd-sourced, AI-driven, crypto currency-backed, digitalised globality, seems a wholly and distinctively twenty-first century endeavour, and indeed in many ways a project like this would not have been possible before now. Likewise, the cause it is being directed to serve, combating extremism and hatred, is equally very much of our time, rife as it is with polarised debate, misinformation and fake news, and this is lamentable. But on the other hand, to harness the great resources of our current state of technology and the vast store of our collective knowledge in the service of global education, understanding and intellectual betterment, well, there seems to me no more laudable end.

This entry was posted in News, Opinion, Uncategorized. Bookmark the permalink.