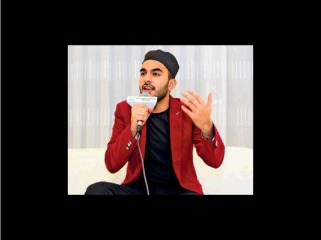 Islamic singer from the United Kingdom, is on a peace mission to Hyderabad and other parts of Telangana, explaining the essence of Sufism through his mellifluous spiritual songs in English and Urdu.

Milad Raza Qadri, who landed in the city on Thursday after performing in Australia, will stay in the state for about 10 days. He will recite Sufi and Islamic songs in Charminar on Saturday night. Milad was born in Glasgow, UK, on March 25, 1990. He has been reciting Sufi songs and Nasheeds (hymns in praise of God and Prophet Muhammad) ever since he was three.

“This is my first visit to India. I have come to Hyderabad with the Sufi message of peace, brotherhood and tolerance. I am here to spread the message of great Sufi saints Hazrat Khwaja Moinuddin Chisti, Khwaja Bande Nawaz and Hazrat Nizamuddin, who stood for peace and brotherhood of mankind,” Milad told TOI.

Young Milad is quite popular among local Muslims, particularly who follow the Sufi order, for his Urdu and English Naats (songs in praise of the Prophet).

One of his Naats – Aye Hasnain ke Naana (O, grandfather of Imam Hasan and Imam Hussain) – is a hit in the spiritual circles.

Expressing concern over growing violence in the name of Islam, Milad said he had been focusing on youngsters and inculcating in them the noble principles and teachings of Sufism in order to wean them away from extremist thoughts and philosophy. “We need the Sufi message of peace and tolerance more today as the world is torn apart with petty differences,” Milad said.

Milad, who released an English album Messenger of Mercy in 2012, said he would soon come out with one more in English. He, however, added that his focus is on Urdu as Sufism could be explained in a better way through the medium of Urdu.

He said when he is not on world tour reciting Islamic songs, he would be busy with his business back in the UK. Milad had won several peace awards in different countries. He said he was attracted by the “beautiful city of Hyderabad”.

Source: Sufi strains to come alive in Charminar with Qadri – Times of India