[Note from Imam Salim: This is article is long but well worth reading. It reflects many of the thoughts I have been having over the past ten years or so. I’d like to know your thoughts.]

How does one resolve these two parallel realities – that while there are fewer people going to mosques than before, houses of worship can and often do help […]

On this rainy Friday afternoon, more than 200 men and women fill the banquet hall of Dunya Restaurant in Alexandria, Va. They sit cross-legged on colorful plastic prayer mats on the carpet, listening intently to a speaker at the podium. A dark-haired man in a crisp suit and tie speaks softly into a mic in fluent English.

The hall is a fixture for dinner parties in Fairfax County’s Muslim community. On Friday afternoons, it’s where MakeSpace holds its Friday prayers.

MakeSpace, which calls itself an inclusive hub for the Washington Metro area’s Muslim community, was founded by Imam Zia Makhdoom — the man at the podium. Zia says it was a response to what he considered a failure of many traditional mosques to cater to an increasingly diverse generation of American Muslims. It is not affiliated with any mosque; instead, it holds its events, ranging from prayer circles to family picnics and dramatic readings, at restaurants and public places.

And unlike most mosques, these events have no screens separating men and women.

In today’s sermon, Imam Zia is talking about the power of prayer in Islam. He begins by telling the story of a 1947 Cary Grant movie, “The Bishop’s Wife.”

In the movie, an angel responds to a bishop’s prayer to build a new cathedral and repair his fractured marriage. Zia recalls how the angel redirects the Bishop’s vision for a grandstanding cathedral into smaller projects to help his community. He grows passionate as he criticizes the obsession with large personal platforms among some in the Muslim community, and why prayer must lead to humility and generosity, not self-fulfillment.

Zia goes on to recite verses from the poetry of Rumi, the Persian Sufi poet, and draws laughs when he gently mocks people’s emotional dependence on their Facebook likes.

“We must try to link our happiness with our relationship with God,” he says.

If you live in America, chances are you have heard about the growing threat of Islam.

We are in the middle of a legal battle waged by the current administration to ban Muslim immigration from several countries, waiting for a 2.0 version of the #MuslimBan to drop on us. Radical Islamic terrorists may have claimed fewer American lives in the past decade than toddlers with guns but have long been rightwing media’s favorite weapon to stoke public fear. A quick Google search reveals hundreds of conspiracy theories claiming that American cities are under attack by shariah law and that mosques – Jihadi training grounds – are multiplying like ants.

In reality, at 3.3 million, Muslims in America form just one percent of its population, a number projected to grow to no more than two percent by 2030. As for those multiplying mosques, research shows that American mosques have been actually losing congregants since 9/11. Like many other places of worship in America’s changing religious landscape, mosques too are struggling to fill empty spaces.

According to Dr. Ihsan Bagby’s Mosque Studies, the average number of participants per mosque dropped from 1,625 participants per mosque in 2000 to 1,248 participants in 2011. And a striking documentary in 2013 launched an intense discussion about the growing distance between American mosques and young Muslims. “Unmosqued” argued that younger Muslims are drifting away from mosques due to a lack of evolution in their leadership and for being unwelcoming to groups such as new converts, native-born Muslims, and women.

Why does this matter? Because contrary to the popularized idea that mosques contribute in Muslims’ social and cultural isolation, they often play the opposite role. A 2011 public opinion survey found that, overwhelmingly, mosques help Muslims integrate into U.S. society as well as politics. This finding corroborated decades of research on other religious groups such as Jews and Catholics where church or synagogue attendance resulted in higher civic engagement and support for core values of the American political system.

So, how does one resolve these two parallel realities – that while there are fewer people going to mosques than before, houses of worship can and often do help congregants integrate more into American society? Is a mosque revolution the answer?

To understand “unmosquing,” it is important to first understand American mosques.

While American Muslims are a relatively small population, they are extremely diverse in terms of culture, language and ethnicity. Most mosques are self-supporting voluntary institutions and tend to serve specific immigrant groups. They are often led by governing bodies composed of wealthy, older immigrants in the community who are their largest donors. Representation of younger Muslims on mosque governance is typically low.

Uzmaa Balbale grew up in Canton, Mich., where her parents migrated from India. Balbale, who is an engineer by training, moved to Vienna, Va. after marriage and started attending a small local mosque. But she soon realized that she had little in common with the other congregants.

“I found few people whom I would consider my peers. People were either significantly older or much younger.”

The mosque Balbale and her husband attended was built by Pakistani immigrants, and most of its events were conducted in Urdu, which Balbale did not speak. It also did not offer activities for children, which became a deterrent after her daughter was born.

Back in Canton, Balbale had grown up in a different kind of mosque. Co-founded by her parents, the mosque was a well-loved community center for a variety of Muslim ethnicities who had migrated to the city since the 70s. It housed sports facilities and most events were open to both sexes. In comparison, the Vienna mosque was rigid about segregating women. Most of its religious classes catered to men.

Balbale’s husband, Munawar Bharde, told me he realized many mosques had norms that had nothing to do with Islamic practice, but that partitioning of men and women was not a big deal. He argued that most mosques target specific ethnicities, and many cultures favor segregation.

“I think partitioning is only in the minds,” he says.

But Balbale disagrees with him.

“I do think that it makes a difference. It made me feel uncomfortable.”

A lot of the discussion around mosque reform today suggests that they need to do more than just offer spaces to pray.

“The mosques of the 80s and 90s need to adapt to people’s lifestyles today,” says Saif Omar, a second generation Pakistani-American who founded the Fawakih Institute in Herndon, Va.

Omar founded Fawakih in 2007 to cater to the evolving intellectual needs of Muslim Americans that were not being fulfilled by mosques due to limited resources. Having studied Arabic in the Middle East and public policy at Harvard University, he saw Quranic Arabic as an important tool for modern Muslim adults, one that would counter common misconceptions about Islam.

But since almost all American mosques are volunteer-run, they often find it tough to hire trained teachers for adult Quranic education. Fawakih trains instructors and provides them to mosques across 10 states, making it easier for them to offer the service. Many of its students as well as teachers are young professionals, and at least half of the instructors are women – who typically lack participation in leading roles at Islamic institutions.

“We have a lot of mosques in America. The key is to make them centers of learning instead of empty rooms,” Omar says.

Beyond integrating learning initiatives, Omar sees many other opportunities for reform for mosques. He proposes a mechanism to share best practices and innovations by successful mosques as well as outreach initiatives like MakeSpace or the California-based Ta’leef Collective, both of which are popular with Muslim millennials.

“Anything good happening at one institution, there should be an organization that can help other mosques see it. We need metrics,” he says.

The All Dulles Area Muslim Society (ADAMS) in Sterling, Va., one of the most popular mosques on the East Coast, runs a wide variety of educational programs for children and adults, including Cub Scouts. Omar thinks one big reason behind Adam Center’s success is that it invested early on in dynamic, forward thinking leadership. Its board also includes several younger Muslims.

Shad Imam, 38, is a former board member of ADAMS, and remembers well when “Unmosqued” came out. It immediately fueled discussions in his social circles of 30-something Muslims who had grown up in America and were actively involved in mosques.

“It made us look into whether there was a problem with the way mosques were run.”

One of the biggest issues that came up was leadership, but it turned out to be more complex than a lack of will. Imam told me not all mosques are able to attract younger volunteers the way ADAMS has. While some do have problems at an institutional level, he believes a big hurdle is that younger people are just too busy to get involved.

This is a gripe shared by many mosque leaders, who struggle to find volunteers from groups that feel excluded. Alia Khan, 48, runs several programs at the 25-year old Muslim Community Center of Greater Pittsburgh in Monroeville, Pa., including a popular interfaith women’s book club. She said the community today is larger and more diverse than it was when she was growing up in America, but mosque volunteers don’t always reflect this growth.

Khan says she and her fellow volunteers want to do a lot more, but most have full-time jobs, and “who would run those programs?”

Congregants also have vastly different needs now. While new immigrants still seek emotional comfort and familiarity in mosques, many others, like native-born Muslims, come for learning or intellectual stimulation. There are also groups that weren’t as visible before.

While her mosque has made efforts to be more welcoming, especially to families by investing into childcare and a playground, Khan thinks it can do more – like divorce support groups, professional development and more interfaith activities. But, while it has a designated volunteer to participate in an inter-faith alliance, he is a physician with limited availability.

“There’s a huge effort required on our part, and we just don’t have enough people to do it.” 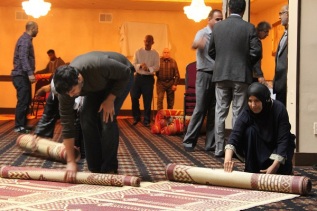 A few years ago, ADAMS conducted a survey to find out why some community members were skipping attendance. Many cited childcare issues. The next Ramadan, it organized a large family-friendly event where people were able to attend with kids. It also became more active online, broadcasting services for those who couldn’t attend physically due to long hours at work or other reasons.

But apart from just convenience, another reason mosques likes ADAMS are pursuing greater online engagement is to counter the enormous scale of misinformation about Islam found online. Extremist philosophies propagated by groups like the Islamic State and Al-Qaeda, among others, have always found the internet’s obscure crevices as fertile recruitment grounds.

Imam says that by becoming more inclusive online, mosques can help protect communities from extreme interpretations, and counter competing narratives of what it means to be Muslim.

“Research shows those who go to mosques are far less likely to be radicalized than those who do,” he told me. “When you don’t have community to talk to, people will go online, and they will find someone crazy.”

Madiha Waris Qureshi is a Pakistani-American writer and international development consultant based in the Washington, D.C. area. She is a graduate student of Interactive Journalism at the American University. Qureshi writes at www.amarbail.com and tweets at @MadihaQ.