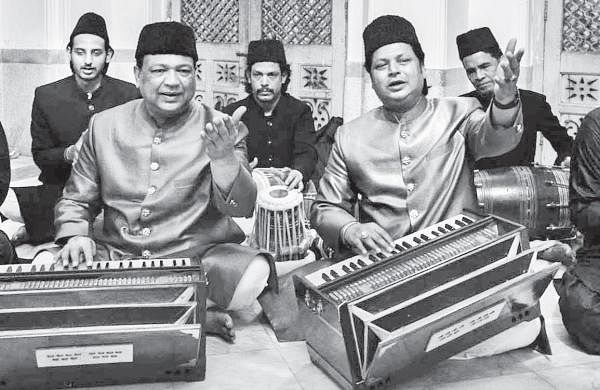 Many might have been mesmerised by Javed Ali’s rendition of Arziyan in the Bollywood film Delhi-6. However, this song cannot encapsulate the grandeur of the 13th Century Sufi tradition of Qawwali, a form of devotional performance.

Despite the fact that, over the years, this tradition has trickled down into family gatherings, weddings, and the Bollywood film industry, these can, at best, be identified as feeble interpretations of a musical tradition that dates back more than 700 years.

The photographs along with selfies taken by the Qawwals under the ‘I am a Qawwal’ Project, are presented at an exhibition in the Art Gallery, India International Centre, which commenced on Wednesday and will continue till November 28.

Chaturvedi says that these selfies are an intimate form of documentation. A series of solo-recitals by Qawwals is also being presented here. The opening had performances by Qawwal Ustad Ranjhan Ali, Kathak dancer Manjari Chaturvedi, and vocalist Dhruv Sangari.

Chatuvedi was always drawn towards Sufism and Qawaali’s spiritual nature. Concerned about its decline, she had asked Qawwals for photographs of their ancestral mehfils (celebrations) only to receive torn images. “I wanted to visually document the devotees with their art. Generations of Qawwals were already lost without documentation. There were still many left who had the opportunity to be recorded,” she says.

A varied compilation
Each photographer documented performances across the country, showcasing the diversity and inclusivity in this musical form. While Khanna visited dargahs (shrines) in Delhi, Amritsar, Jaipur, and Hyderabad, Quraishi photographed the Qawwals of Lucknow and Safipur. In comparison, Kejriwal documented the lesser-known women Qawwals such as Chanchal Bharti from Muzaffarpur as well as those from the Hazrat Sufi Inayat Khan Dargah at Nizamuddin, who are breaking away from the androcentric structure of the art.

Khanna was inspired by the magical atmosphere at Ajmer Sharif Dargah during Urs (the death anniversary of Khwaja Moinuddin Chishti). “Thousands had flocked to the dargah and, at separate corners,  different Qawwali groups were performing. Although the groups were diverse, there was inclusivity in their devotion,” he mentions.

Similarly, Quraishi speaks of how Qawwali facilitates the coming together of India as a country. “Although, society, at large,still relates Qawwali with Islamic culture, I have documented many Qawwals who aren’t Muslims but are devoted to the art.”

Quraishi adds that while it had been informative to document them amid performances, he wants to chronicle the performers in-depth. “Performing Qawwali is not high paying; Qawwals have supplementary jobs to fall back on. I would love to go and document these artists’ lives to better interpret them and their art,” he concludes.