It is among the few structures to have incorporated classical European elements within its architecture.

Hyderabad: Crowded lanes, recalcitrant two-wheeler drivers, rash four wheelers and you make a right turn hoping the lane is large enough for a vehicle. And then the surprising roominess, the attempts at modernity among the traditional. Many cars are parked outside and then the haleem hundi that stays tightly shut, waiting for the month of Ramzan when it will be cooked and served to all.

The Dargah Hazrat Shah Khamosh cannot be missed, shimmering in the heat, while the rest of the place is under shade and looks cool. It has many arches, lanes, gateways, and yet there is an orderliness about it.

This dargah was awarded the Intach award in 2007 for its blend of Islamic and Gothic architecture and for the incredible care taken over the final resting place of the revered Sufi saint who was born Syed Moinuddin Hussaini. Surprisingly, there are a number of dargahs within this locality of Nampally, which is also neighbours with Darussalam, the home of politics.

“The Dargah Shah Khamosh is probably the first among the few religious structures to have incorporated classical European elements within its architectural inheritance to produce an arresting blend of two very distinct and diverse styles,’ says the Intach citation. 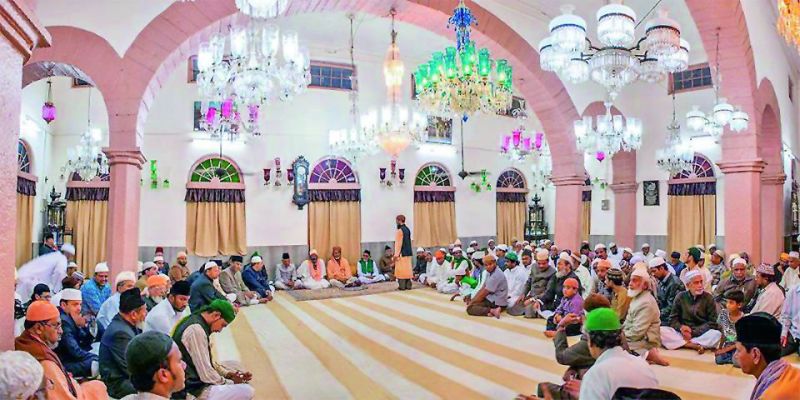 “The internal arcade of the dargah has classic Gothic arches. Gothic architecture has been extensively used in churches. It was a time when the St George’s Church in Abids was constructed. Therefore, the influences are clear. Further both Islamic and European architecture have the same root and are derived from Graeco-Roman architecture,’ the citation explains.

The dargah itself was built in the late 1800s, when the European influence was increasing in Hyderabad architecture. Intach co-convener Sajjad Shahid says in the citation: “Since the complex was constructed in the same era, it is most likely that those involved in designing the building brought in these elements. The crown of arches on the outer arcade have motifs which are visibly European.”

The home is also in the same premises, thus making it all inclusive. There are beautifully designed gardens and enclosed plots and different houses all within the same compound. And the entire house is filled with chandeliers from Europe – hand-made Baccarats, Osslers, Bohemians, are all on display, though currently covered in plastic, but when it all comes off, the place shimmers with glowing lights.

Hazrat Shah Khamosh, a Sufi saint of the Chisti Sabri order was laid to rest here in 1288 Hijri, which corresponds to the year 1871. The complex is full of structures spread over a large area which once had three gardens – Nabi Bagh, Ali Bagh and Jaan Bagh – gifted by Nizam IV Nawab Nasirud Dowla.

“We follow the talks by Radholi Sharif of Faizabad in Uttar Pradesh. He is knowledgeable and we follow it on YouTube,” says Zayeed Akbar. He feels that the drawback of Sufism, which believes in Deen Aur Duniya, lacks in education, but adds that people believing in Sufism are a grounded lot.

The dargah complex was built by Hazrat Syed Mohammed Hussaini, forefather of the current family. The current muttawali or caretaker is Akbar Nizamabad Hussaini, the fifth generation to be entrusted with this task. He will be followed by Sayeed Qutbuddin Hussaini or popularly known as Zayeed Akbar.

Hazrat Shah Khamoosh was from Bidar and it is said that when he was seven years old a fakir predicted that he would become a Sufi saint.

The boy whose given name was Syed Moinuddin Hussaini later to be called Hazrat Shah Khamosh, began working at a dargah. He had a little skirmish with a peerbhai (brother in faith). That day he brought this to the attention of the murshid Hafiz Mohammed Musa Manakpuri, who told him “Tum khamosh hojao.”

Legend has it that he did not talk for 25 years. He began talking again when his friend Imam Ali Shah refused to come out of the water after a long swim and said he would do so only if Shah Khamosh said the Azan. There is yet another explanation that seems simpler — that he used the pen name Khamosh for his poetry.

This is one of the few dargahs where you can hear shehnais and lilting melody. Musicians come from far to perform, which is also an integral part of the Urs.

Akbar Nizamabad Hussaini, the current muttawali of the Dargah says he draws in the youth through music.

“There is no discrimination of caste, creed. Anyone can come and take blessings. Here music unites all and explains the unexplainable,” he says.

The Dargah stands on six acres of land. “There are tenants who have been living here for long, as those days we gave free accommodation to the qawalli singers, and their ancestors are buried here,” says the muttawali.

The other historic importance of this Dargah is the Bihishti Darwaja or the door to heaven which is installed within the tomb. This door which was recovered from the tomb of Baba Shaik Farid in Punjab and brought and installed in this dargah as Hazrat Shah Khamosh was a spiritual successor of Shaik Farid.

The family has taken great pride in preserving its inheritance and has taken great care to restore objects of art and maintain the Dargah and all its other buildings with interest and passion.